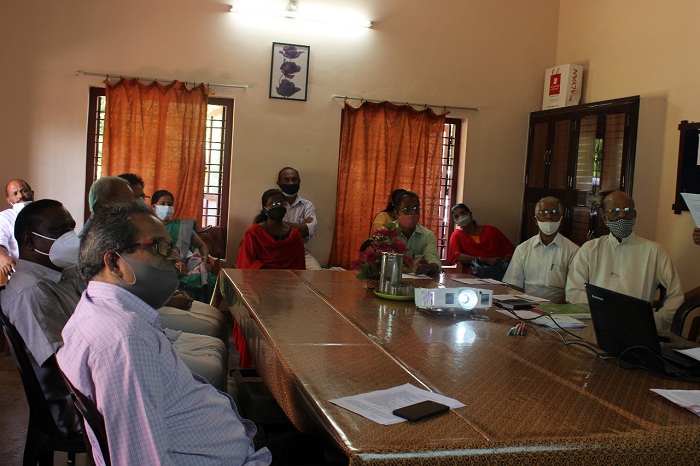 The 18th general body meeting of Neethi Vedhi was held on 29th June 2021 at Kakkavayal office. Adv. Fr. Stephen Mathew presided over the meeting. The annual report was presented by Ms Flaisy Jose. Adv. Jomol Joy presented audited account and proposed budget, which were approved by the members. The details of programs being implemented in the current year were discussed. It was decided to pursue with the interfaith peace building program besides the regular human right interventions for Adivasis, women and children.

The general body discussed the setback in online education for Adivasi students due to a number of reasons. The meeting resolved to request serious intervention from the government to organize study centers for Adivasi students. A press note was issued on this aspect.

The general body also resolved to request the Minister for the Welfare of women and children and the district collector of Wayanad to take necessary steps to coordinate different stakeholders involved in supporting women in distress.

The meeting demanded impartial inquiry regarding the wide range wood cutting in the state with alleged support of the officials. It was demanded that the Adivasis must not be targeted to save the officials and wood contractors.

Mr. James Thomas welcomed the gathering and Adv. Maria proposed vote of thanks.

A preliminary training for the core team members selected from different panchayats of Wayanad district was held at Neethi Vedhi office.

The executive meeting of Neethi Vedhi district peace forum was held in the afternoon on 29th June 2021.

The 18th general body meeting of Neethi Vedhi was held on 29th June 2021 at Kakkavayal office.